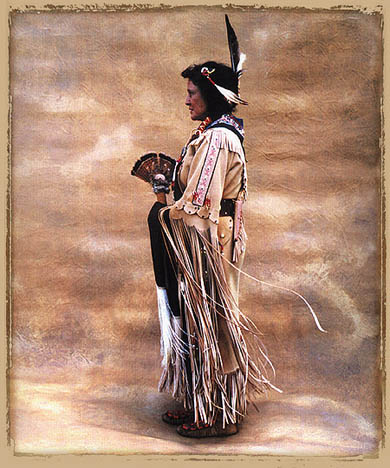 “My grandmother was born in a cave in Granger County, Tennessee. During the Civil War her family had to live there to hide from the soldiers. She lived in that cave until she got married. I’d ask her ‘what’d you do in that cave for fun?’ She’d make mud pies, play with her pots and play in the creek that ran around there. There is a waterfall inside that cave, with the most beautiful little water pearls-little drips of water that became little tiny white shing pearls. Call ’em cave pearls.

When my grandmother got married, she took her fire with her. You always took your fire with you. It was sacred, you know. We’d ask our grandmother about ‘being Indian’ , and she’d say ”Better not to tell. People treat you better if they don’t know.’

She made her own medicines. Picked her own ginseng and lots of other things. She had this one bone that she always wore around her neck. She gave it to me and I liked it and wore it. My in-laws made a fuss over it. They thought it was dirty and didn’t like it. It was little. She told me it would help protect me from toothaches and headaches. Never did have ’em when I wore it.

We moved to Knoxville, but my grandmother stayed in the hills in her little house. Flies so thick in there, you couldn’t breathe. Chickens walking in and out of the house. She couldn’t stand coming down to Knoxville. She’d go home and say how clean the air back in the country was.”